November 14, 2021
Introduction
|
What are Terpenes?
|
Are They Intoxicating?
|
Canabis Terpenes?
|
Warnings 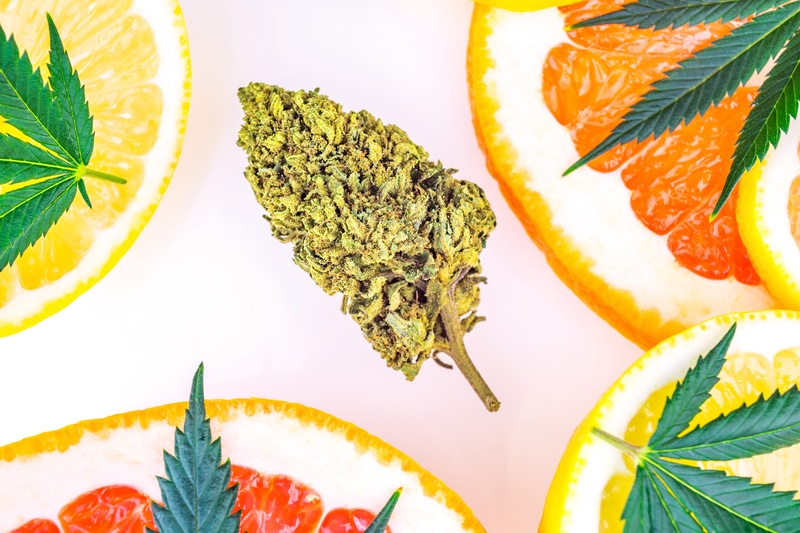 Terpenes can be found just about everywhere. Life as we know it wouldn't be the same without terpenes. Without terpenes, you could never stop to smell the roses. You might say that life without terpenes is even tasteless. Terpenes can be a little confusing; do they influence taste, smell, or both? Just what are terpenes, and what is their role in life? Take a deep breath and breathe out and repeat. Take in the aroma and prepare to learn about the wild world of terpenes.

Technically terpenes are a natural product of nature. They are unsaturated hydrocarbons produced by many different plants, trees, fruits, and vegetables. Terpenes are aromatic compounds that can be found in things such as citrus fruits, lavender, pine, and more. They help give these things flavour and smell. When you grab an orange and tear it, that blast of citrus smell you get comes from terpenes. The flavour of that sweet, succulent orange when you take the first bite comes in part from terpenes. Have you ever had a roasted pine nut? If so, you've experienced terpenes via flavour and their aromatic properties.

Terpenes help things like oranges to taste and smell like oranges. They are responsible for the pleasing fragrance when you inhale a deep breath of roses or other flowers. Taking time to stop and smell the roses, as you see, just wouldn't be the same without terpenes.

There are forms of meditation that embrace doing exercise on a forest floor covered with needles from coniferous trees referred to as forest bathing. It is the belief that terpenes play an extremely important role in the overall well-being of the human body.

Terpenes are found in all kinds of different plant life around the world. These days when people start talking about terpenes, they are often referring to terpenes found in cannabis. Cannabis is extremely rich in terpenes. When people find out that cannabis is rich in terpenes, usually, their next question is will terpenes get me high? Or can you get a buzz from terpenes?

Are There Intoxicating Effects from Terpenes?

Many people want to know whether or not terpenes will give them a buzz or get them high. The answer to that is a little complicated. Most terpenes will not give you a buzz or get you high. However, there are some terpenes that are labelled as psychoactive. They received the psychoactive labelling because they exhibit certain effects on the human brain. Some people believe that terpenes may also play an extremely important role in determining the effects of cannabis.

Terpenes and Some of Their Common Characteristics

As you have discovered, terpenes are common in plants of all types. Cannabis is no exception. In fact, cannabis is extremely rich in terpenes. There are many different terpenes found in cannabis, with a handful of them being very common.

These terpenes that are commonly found in cannabis are responsible in part for helping to give it its distinguishing characteristics such as flavour and aroma. Let's explore some of the common terpenes present in cannabis and learn a little bit about them.

Terpenes Can Also Present Some Concerns

Terpenes are also potentially dangerous for some people. Many of the allergic reactions people have to products are because of terpenes. If you find yourself allergic to soaps, fabric softeners, and other items that have a strong fragrance, you may be allergic to a terpene in them. If this is the case, you want to try to identify this terpene so you can learn what it is found in so that you can avoid it. Some people experience adverse effects when consuming cannabis products. It is the belief of many people that terpenes are responsible for this. This would make a lot of sense. If you are allergic to lavender-scented fabric softener sheets and consume a legal cannabis product that is rich in linalool, it may present a problem.

Thanks to technology, learning about terpenes is easier than it has ever been. You don't have to be a botanist or have a degree in organic plant-based chemistry to learn about many of the common terpenes found in products today. There are terpenes not mentioned above, such as borneol, eucalyptol, humulene, camphene, and more, just waiting for you to explore and learn more about them.

Find out the names of some of the terpenes you would like to learn more about, and simply put them in your favourite search engine and press enter. Then sit back and prepare yourself to take an educational journey into the vast world of terpenes.